I designed the following chart as a tool to learn how to convert the Cree alphabet into syllabics, and vice versa. Aside from a few important changes, it is based on traditional syllabics charts. This version features the letters used in the standard alphabetic orthography and the syllabics used in the eastern syllabic orthographies. The terms cardinal and ordinal refer here to the orientation of the individual syllabic characters. They are included here as a pedagogical tool, in line with my use of these terms in the syllabics lessons published on this blog. The third category, listed here as supplemental, groups together characters that were originally designed to represent sounds from non-Cree languages, as when transcribing English names. 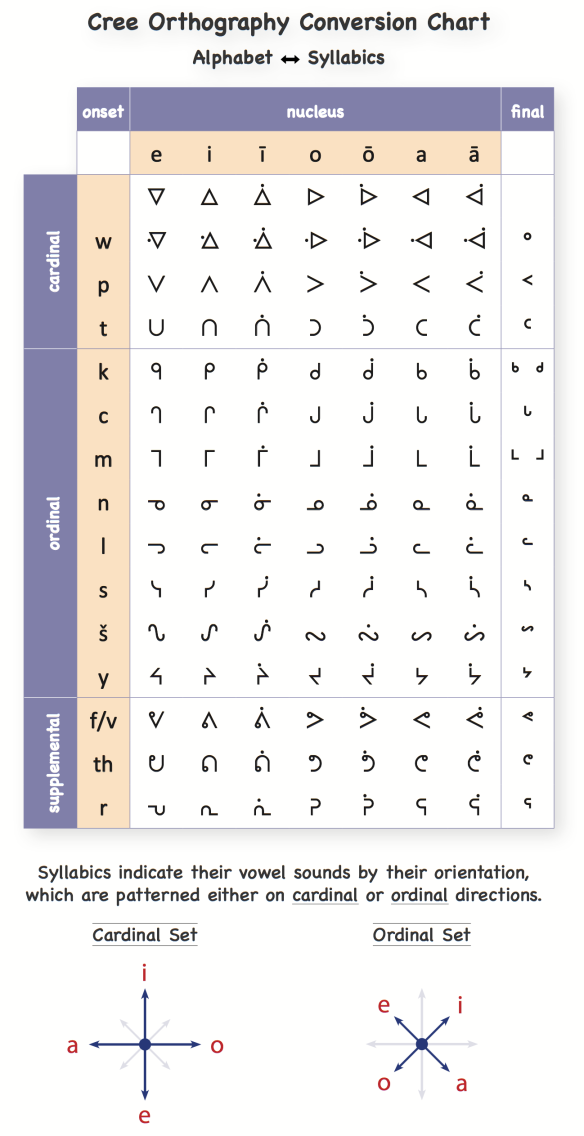 A feature of the alphabetic orthography is that it is not based on English or French phonetics. Rather, it is based on the actual sound structure of the Cree language. As such, every Cree sound is represented by only one letter, making the conversion from the alphabet to syllabics that much easier. For example, the Cree sound variously pronounced as /tsh/, dzh/, /ts/ or even /tz/ is always represented by the single letter c rather than the awkward and variable use of tsh, ts, tch, ch, g, and even j, all of which derive from English and French phonetics. Similarly, the Cree long vowel pronounced as /i:/ is written as ī (or alternatively î), rather than using the English based e, ee, ea, or even ii. As a final example, the Cree sound that varies between /k/ and /g/ is always spelled as k, rather than drawing from English phonetics and misleadingly using k and g for what is really only one sound in Cree. A word, therefore, commonly written as meegwetch, meegwech, miigwetch, or even miigwech, is consistently written as mīkwec in the Cree alphabet and ᒦᑴᒡ in syllabics.

Spelling in a consistent manner is an important requirement for literacy. Not doing so creates barriers for language learners and hinders the progression of literacy for a language that is already at risk of being lost in many communities across Cree country. For those wishing to learn how to read and write in syllabics, lessons can be found here.